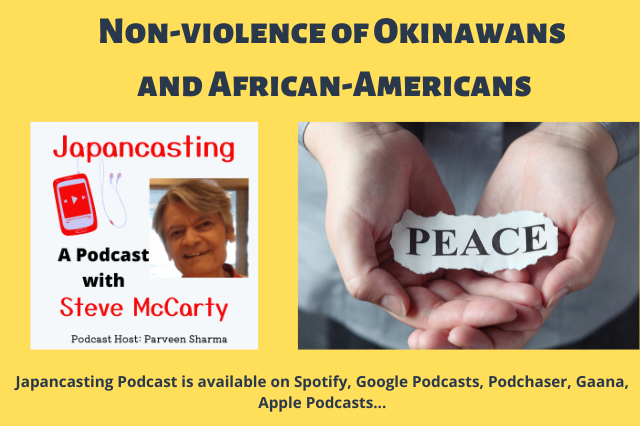 Japancasting Podcast enters into the 11 Episode journey with Prof McCarty making us know and understand the Japanese Culture and History in a straightforward manner. His explanations and energy have been identical to the same zeal for learning found everywhere in the world. We easily identify with him and his efforts.

Next are some episodes where you can listen to Japanese university students speaking easy-to-understand English and find out what they think about social issues. These episodes were recognized as an “Effective Practice” by the Online Learning Consortium in the U.S. for “Student-Generated Content” in “Podcasting Student Performances to Develop English as a Foreign Language Skills.” Osaka Jogakuin University has conducted English speaking competitions where Prof. McCarty recorded his students’ performances for these podcasts. In this episode, the Presentation Contest winners play the roles of Martin Luther King, Jr. and Awagon Shoko from Japan's history. You can read the script while listening for a few minutes.

Listen to the Episode Here on Hubhopper Site (CLICK HERE)

“Non-violence: A principle shared unexpectedly by African-Americans and Okinawans”

Martin: Hello everyone. I'm Martin Luther King Jr. Today, I’m going to tell you about my dream. We can never be satisfied as long as black people are victims of unreasonable discrimination and violence committed by white people including the police. We suffer from the violence of power hoses on the street and the violence of police dogs. There are still the expressions of despising us and hating us. So we can never be happy as long as our children are deprived of their self-confidence, self-respect, and dignity.

Martin: Thank you. But, who are you?

Awagon: In 1945, a terrible battle was fought by America and Japan on our land: Okinawa. It lasted for five months and nearly 100 thousand innocent Okinawan people were killed and many more were injured. Also, our land and houses were destroyed by the U.S. military.

Awagon: At that time, we hated Americans, but later I learned “命どぅ宝 (nuchidutakara [in the Okinawan language])”. It literally means that human lives are a treasure. In other words, nothing is more precious than human life. The lives of Okinawans are precious. But I realized that Americans also have valuable lives. So people should never kill each other. I also support and exercise the principle of non-violence.

Martin: It’s likely that we have a principle shared unexpectedly. Though our countries, Japan and America, are distant and different, it's very interesting to have the same idea.

Awagon: Today, so-called "terrorists" exercise violence and threats supposedly to get their human rights or achieve peace. They've never tried to use non-violence, but look at reality, for instance, 9/11 caused the Iraq War and Iraq's damage is several times larger than 9/11.

And what is next? It shows that violence just made more. And the violence never ended. Therefore, there is no meaning to using violence. That’s why we maintain non-violence.

Martin: That’s right! That’s why we cannot find a key to the settlement of problems. At first sight, non-violence does not seem to work. However, non-violent movements are the most positive steps for bringing peace to this world.