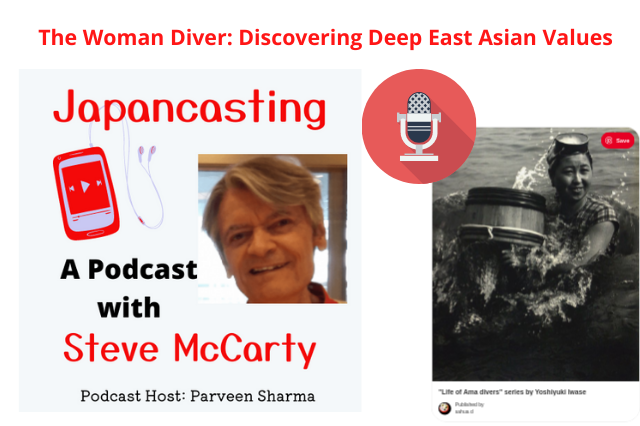 One of the oldest professions is that of the diver for pearls or humbler offerings of the sea. Akiko Takemoto and Steve McCarty have translated a heart-rending story from various Japanese versions, as a prehistoric legend moved from oral to written traditions over millennia. To help readers ponder its significance, brief discussion points for college or secondary school classes follow the story.

This podcast renders the ancient folktale "Ama" into English, investigates its origins, and attempts to interpret its timeless significance. From a prehistoric oral tradition, it evolved into the temple chronicle of Shidoji in Kagawa Prefecture and a Noh play with its setting there. In modern times the ama are women who dive for pearls and the like, but from the earliest times, men and women dove for seaweed, fish, and so forth. The story thus becomes "The Woman Diver" with the division of labor, whereas the title was originally or simply "The Diver," who was in any case a woman. The following translation is based on the Noh script, Kagawa folktales, and legends, but the central motifs remain perennially the same: the woman makes the ultimate sacrifice for her husband, to raise the future status of her son.

About 1,300 years ago, a very handsome young man sailed over from Nara to the small seaside village of Shido. Nobody knew who he was or what he was there for. However, the young man fell in love with a lovely girl in the village. She was a humble seaweed diver like many others in that area. Soon they married and had a pretty baby boy, whom they named Fusazaki after a place name in the vicinity. They should have been as happy as anyone, but the husband was often seen brooding over something, to the great apprehension of his loving wife. One day she said to him, "Please tell me, my darling, what makes you so sad?"
"Nothing, my love."

"Nothing? Oh my darling, I do see you have something on your mind. Please tell me what it is if you really love me," said the wife with tears in her eyes.

Then the husband told her the following story, revealing his noble origins and what had brought him to this hamlet so far from his home in the Capital. The young man was Tankai [Fuhito]; son of the late Fujiwara Kamatari, a most distinguished aristocratic statesman of the central government. Tankai's younger sister, who was married to the Emperor of the T'ang Dynasty in China, had sent forth three very precious things as her offerings to the Fujiwara family on the occasion of a grand memorial service for the deceased patriarch Kamatari. One of the gifts was a magic drum which, once beaten, never ceased emitting a most exquisite sound until it was covered with nine layers of silken robes. Another was a unique inkstone, which, if rubbed with an inkstick, could produce the finest ink without applying a drop of water to the stone. The last was a crystal ball enshrining an image of the Buddha who never failed to face you at whichever angle you looked into the ball. These three things of rarity were meant to gratify the departed soul.

But while the ship was sailing through the Inland Sea off the coast of Shido, a Dragon King got wind of the treasures and wanted them. He at once sent out a tremendous thunderstorm as well as legions of dragons against the small vessel. The men fought bravely, but to avoid losing everything they were forced to give up the Ball of Buddha to appease the dragons.

The memorial service for his father was a magnificent one; the two offerings from his sister the Empress of China were immensely admired. But Tankai could not forget the last one - it was the treasure of treasures. Thus he sailed over to Shikoku and came upon the coast closest to the sea-battle, but he could find no way to retrieve the crystal ball from the dragons. The nobleman heaved a deep sigh when he finished his long story.

"Let me try my best if it may please you. But..." Turning her tearful eyes to her baby son, she added, "If I could bring it back to you, then could you make this son of ours, Fusazaki, your heir?"

Tankai consented without hesitation, assuring her that the boy would have a brilliant future as his heir.

The next day they sailed out into the sea. The woman put a long lifeline around her waist and said, "Hold the end of this line, will you? Haul me up when I pull on it. That means I've got it." Her husband nodded, gripping the end of the line. Then, with a knife in her hand, she quietly disappeared into the depths.
Down, down she went, through the cold darkness of the deep. It seemed fathomless. But the love of a devoted mother and wife had made the little woman fearless. On and on she went until she found herself in front of a towering palace ferociously guarded by eight dragons and swarms of crocodiles. For a moment, she hesitated, but praying once more for the help of Kannon, she burst into the palace brandishing her knife, dashed to the ball, snatched it, and ran, closely pursued by the infuriated sea-monsters.

As they caught up with her at the gate of the palace, she quickly cut herself below the breast, inserted the crystal ball, and fell down as if dead. Abhorring blood and death, the dragons fell back, while the woman pulled on the lifeline held by her husband above.

The man hauled and hauled until he had hauled up his wife. But to his horror, she was dying, terribly wounded and empty-handed. He held her in his arms, only to hear her last gasp: "... my breast."

There in her breast the husband did find the Ball of Buddha for which he had come to these shores. He left for the Capital with the crystal ball and his son Fusazaki, to fulfill his filial duty and his promise to the poor woman diver.
*****
Discussion Questions: What East Asian values are portrayed in this story that are more important than survival? What value conflicts are involved, and ultimately why does the woman diver willingly sacrifice her life? Which values are East Asian, and which may be universal?

For more articles by the author on Japan or Asian Studies, see https://japanned.hcommons.org/japanology or https://wilmina.academia.edu/SteveMcCarty/Japan